“The world is a book and those who do not travel read only one page.” – St. Augustine

It had been a while after Yercaud trip that me and my hubby didn't go anywhere for sightseeing. It had been more than a month that we were in US and having not been anywhere to explore an unknown place went quite contrary to our nature. We both have itchy feet and exploit every chance thrown our way to discover new places. Needless to say, a major portion of our pennies saved through our painstaking effort are spent in fulfilling our desire and thirst for knowing the unknown. With that thought we planned a sudden trip to Mackinac Island during the Easter break.

Located in Michigan State, the island offers a breathtaking view of Lake Huron and Lake Michigan. St. Ignace and Mackinaw City are the nearest two cities by the Mackinac Island. You may avail lodging and food facilities in both. However, we chose to stay in St. Ignace because St. Ignace is bigger than the Mackinaw City with better options for hotels, food chains and ferry services. Also, it is home to another attraction called "Mystery Spot' or what is popularly known as "G-spot' which is operational only during summer months. St. Ignace is located in Upper Peninsula of Michigan whereas Mackinaw City is in Lower Peninsula, both separated by Huron and Michigan Lakes and joined by the 3rd longest suspension bridge in the world and the longest in USA called "Mackinac Bridge." Driving down the bridge with both lakes on either side is an experience to be cherished. The vast expanse of the azure reflecting on the water of the lakes is bewitching. The magnitude of that natural beauty can never be captured in the frame of any man made camera.

It took us about 6 hours to reach St.Ignace from Perrysburg, Ohio. We started late around 1 O'clock in the afternoon and reached there by 7 in the evening. Before checking into our hotel while there was still sunlight shining on us, we decided to take a round along the shore drive of St.Ignace city overlooking the Michigan Lake. The return journey along the same offered us one of the most beautiful sights of twilight with the Sun setting below the lake igniting the surrounding ambience ablaze with stunning shades of red, yellow and flaming orange contrasted perfectly with the backdrop of Blue Ocean. The view was just amazing ! 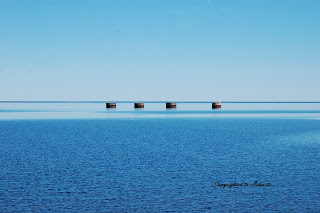 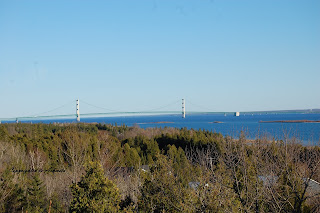 Since St.Ignace is scarcely populated with hardly 1500 occupants, once the sun is set, darkness engulfs the entire city with hardly any choice of recreation remaining open. So before the city sank into darkness, we quickly bought takeaways and shot off to our hotel. The 6 hours long drive left us pretty knocked out and we retired to bed before our usual time. After all, a long day was awaiting us the next day. 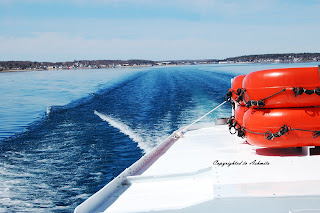 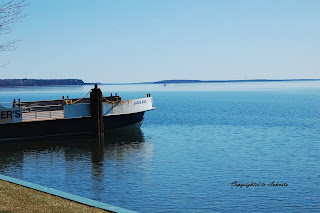 Quite a few ferry service providers namely, Sheplers, Star Line and Arnold Transit safely carry passangers to the centre of Mackinac Island from St. Ignace and Mackinaw City. So if you plan the trip in advance, make sure to check out the schedules and timing for the shuttle and book your seats beforehand. We made a huge blunder of assuming that the ferry service will be operational throughout the day and didn't note down the schedules for the same. Consequently, we had to idle some precious hours away waiting for the next ferry, missing the previous ferry just by few minutes. Due to wasting time awaiting a ferry, we were left with only 3 hours to complete exploring the island before boarding on to the last available return ferry at 5 p.m.

We purchased our seats in Shepler. The indoor of the ferry was precious, furnished with comfortable wide seats and transparent glass panels providing a crystal clear vision of outside beauty. For people looking for outdoor seating, the deck was properly arranged with seats, with an open air roof directly under the sunlight. Though most of our co-passengers initially occupied the deck but once the ferry set sail, the chilly wind outside coupled with the cool water sprayed by the wave ripples created by the ferry in motion caused much discomfort and within minutes, more than half of the deck was empty. I basically like the comfort of indoor seating, but giving in to the demands of my hubby, I sat outdoor on the deck. Once the ferry began to move, I could not raise my head due to the heavy wind thrashing my open hair all over my face. Before long, I went downstairs and found myself a seat near the window. My hubby followed soon along with rest of the other passengers.

Mackinac Island is home to 500 residents throughout the year. During the peak season, however, the population skyrockets owing to the surge of oncoming tourists. Besides ferry, the island can be reached via private boats, small aircrafts and in the winter by snowmobiles. The downtown of Mackinac Island is dotted with a string of hotels, restaurants, apparel stores and candy shops. Motorized vehicles being prohibited within the island, bicycles and horse drawn carriages are the only modes of transport available. You may bring your own bicycle or you may hire the same from one of the many bike rental services available in the island. All the ferry services allow passengers to bring bikes on board for a fee. The charge of the bike on rental is made by the hour. We shelled out around $ 50 for 2 hours. Since I don't know cycling, we were forced to hire a double bike whereupon my hubby performed the act of balancing and I merely put my legs in motion to maintain coordination. It was indeed a joy ride along the trail around the island enjoying the breathtaking sceneries popping fast in and out of sight. 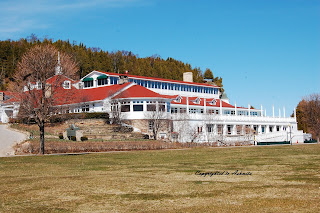 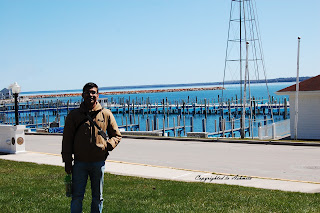 About 8 miles in circumference, it usually takes about 2-3 hours to fully bike about the island, depending on the time spent in viewing each of the interesting spots met along the way. Since we frittered away some crucial hours waiting for a ferry, we fell short of time to fully circumambulate the island once in  our bike. Due to limited time in our hands, we missed out on some of the important landmarks including the Grand Hotel and Michigan Governor's Summer Residence. 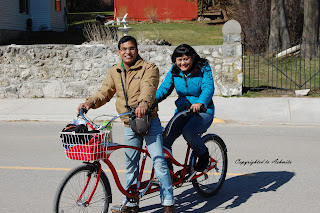 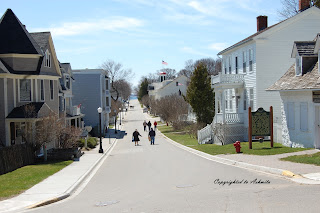 
The Arch Rock is one of the must see points in the island. Nearly 150 feet above the ground, it is a natural lime formation. The sun on top brought about a fascinating beauty by setting the arch aglow and I just adore the pic below captured by my hubby.


Devil's Kitchen is another hallmark tourist point in Mackinac Island. The cavern, naturally formed into the shape of a human face with open mouth ostensibly fortifies the folk tale of cannibals, possessed by evil spirits, capturing and eating people, who came too close to this ill-omened location, alive. 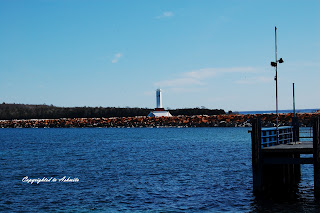 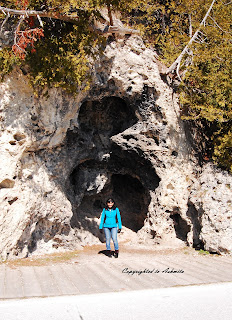 Regardless of our erroneous planning, we succeeded to savor the magnificence of nature the island is blessed with. The bike trail around the island offers you the scope to witness one of the most enchanting panoramic views of nature in its glorious form. The iconic scenic beauty will definitely remain etched in my memory forever. Hopefully, I will visit there again in not so distant future.